In an announcement to Tucker Dealers last week, Tucker Powersports announced the postponement of it's annual Road Show Tour concentrating instead, on the up coming AIMExpo in Las Vegas. See the official communication to Tucker dealers below: Dear Tucker Dealer, We want to inform you that the Tucker Road Show tour, which was announced earlier [...]

Tucker Powersports Preps for AIMExpo and a Great Year Ahead

Tucker Powersports, the go-to supplier for powersports retailers across the country, continues to prepare for its new and exciting role in the 2021 AIMExpo. The relationship between the two organizations integrates the Tucker Show, an annual expo and training event for powersports dealers, into AIMExpo. Dealers who purchase products from Tucker are the greatest beneficiaries of [...]

Powersports Data Solutions is pleased to welcome former American Honda national service manager Brad Little to our team. Brad has over 35 years of experience in the powersports industry. He started his career in dealerships working as a technician and has held various sales and service roles within the American Honda organization. In this newly created [...] 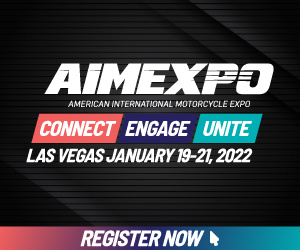 We're on the final countdown to AIMExpo 2022 where

We are big fans of @her.two.wheels … If you have